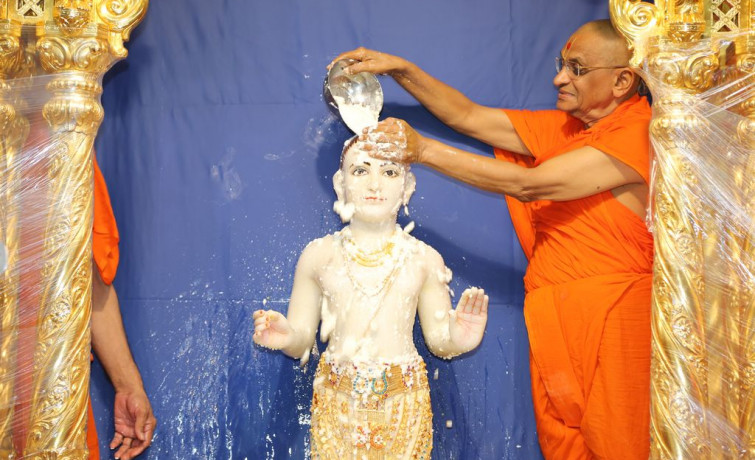 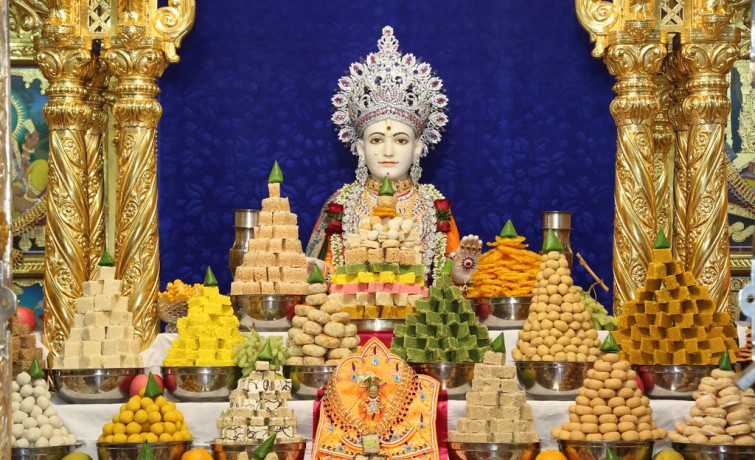 Tuesday 28 February 2017, was observed as the Shree Sadguru Din commemorations. This day, Fagun Sud 2, has a special significance in the history of our supreme Karan Satsang. On this auspicious day, in 1972, Jeevanpran Shree Muktajeevan Swamibapa emerged from His 61 day continuous meditation, during which, Lord Shree Swaminarayan Himself commanded Swamibapa to give a physical embodiment to His supreme, eternal, salvation-granting throne, Shree Swaminarayan Gadi.

After the Sadguru Din meditation and devotional singing, Acharya Swamishree bestowed divine blessings to the thousands disciples who had gathered on this occasion. To mark 38 years since Gurudev Swamibapa appointed him as leader of the Faith, the Sants and disciples present performed poojan to Acharya Swamishree Maharaj.

During the afternoon session, the disciples of the Maninagar region performed a mass mahapooja ceremony, in honour of Acharya Swamishree Maharaj’s year long Amrut Sadhbhav Parva.

During the evening, Sants and disciples held an evening of devotional songs, during which the glory of the Faith and the great deeds performed by Acharya Swamishree Maharaj were narrated. This program was called, ‘Aaj Amrut ni Heli’ – the unsurpassed stream of nectar that we are fortunate to be enjoying today, at Shree Swaminarayan Gadi, through Acharya Swamishree Maharaj.

During His travels in the Gujarat regions, Lord Shree Swaminarayan visited this location on numerous occasions. He used to sit always under a particular mango tree. There, He would sit in quiet contemplation, and become extremely pleased. Sadguru Shree Gopalanand Swamibapa once asked, “Lord! Why do You make detours to visit this particular location? Why do You always sit under this particular tree? Why do You never forget this site? What is its significance? Have mercy and explain why You cherish it so much.” Lord Shree Swaminarayan explained, “In the future, it is from here that My true, eternal philosophy will be spread. I will preside here, and remain here, considering this to be My home.” At the precise site of that particular mango tree where the Lord used to site, now magnificently presides, Shree Ghanshyam Maharaj.

Exactly 73 years later, on Wednesday 01 March 2017, Jeevanpran Swamibapa’s beloved heir, Acharya Swamishree Maharaj performed the ceremonial bathing of the Lord to mark the anniversary. Shree Ghanshyam Maharaj and Shree Harikrishna Maharaj gave darshan without their robes, and were bathed with the five nectars, saffron, yogurt, sugar, honey and ghee. A lavish array of foods was then presented to the Lord. 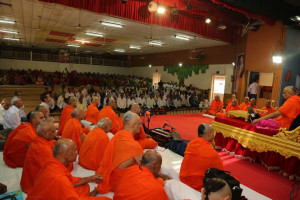 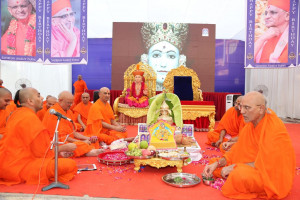 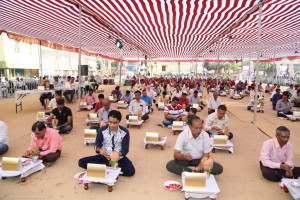 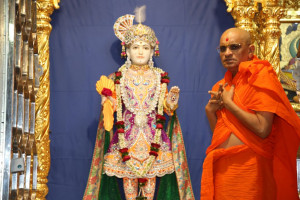 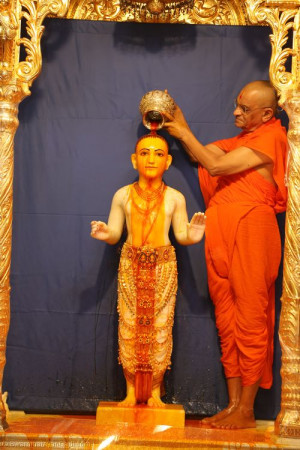 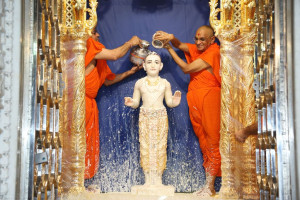