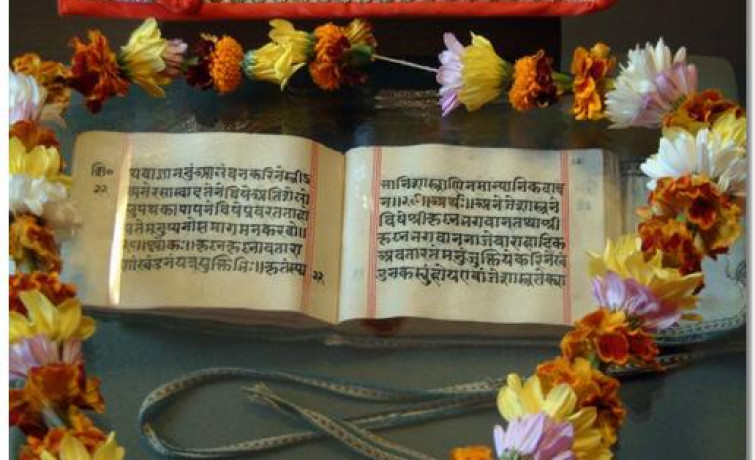 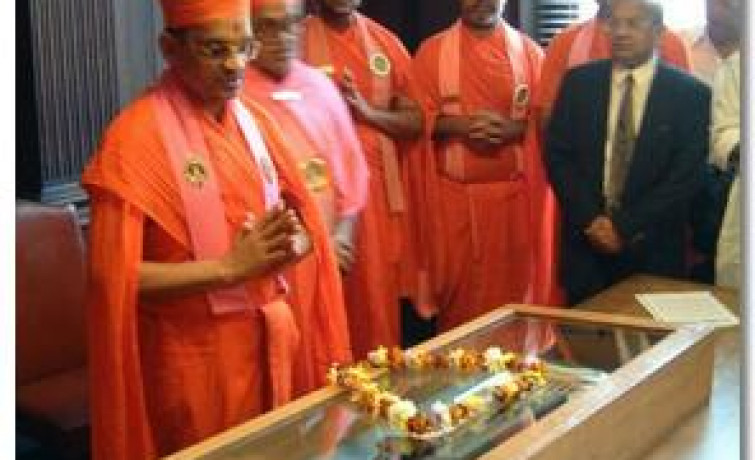 On Tuesday July 30th 2002, His Divine Holiness Acharya Swamishree visited the Bodleian Library in Oxford University for the darshan of the Shikshapatri.

On Tuesday 30th July 2002, His Divine Holiness Acharya Swamishree Purushottampriyadasji Maharaj, spiritual head of Shree Swaminarayan Gadi Sansthan, Maninagar visited the Bodleian Library in Oxford University for the darshan of the Shikshapatri. He was accompanied by a large group of his Sants and disciples.

After being greeted by Mr Shaunaka Rishi Das, Director of the Oxford Centre for Vaishnava and Hindu Studies, Acharya Swamishree Maharaj and the group were escorted to the Bodleian Library to view the Shikshapatri. Acharya Swamishree Maharaj was given a special viewing of the Shikshapatri in the Governor’s boardroom. This had been specially arranged by Dr Gillian Evison, Director of the Bodleian Library, Oxford University, who was also present on this occasion.

On behalf of Shree Swaminarayan Gadi Sansthan, the Worldwide Centre for Spiritual, Cultural and Social Welfare, Acharya Swamishree Maharaj gave a cheque to the Bodleian Library in recognition of the tremendous work that they have instigated for the preservation and conservation of the Shikshapatri and other great Hindu texts. The cheque was then presented to Dr Gillian Evison by the Trustees of the Swaminarayan Temple, Golders Green. Acharya Swamishree Maharaj signed the Guest Book on behalf of Shree Swaminarayan Gadi Sansthan.

Dr Evison and Shree Shanakaji described the work of the OCVHS and the Digital Shikshapatri project. His Divine Holiness Acharya Swamishree Maharaj blessed the project and presented Shree Shaunaka Rishi Das with a traditional ceremonial paagh (turban), a shawl and prasad. Dr Evison was also presented with a shawl and prasad by the trustees of the Temple. Shree Shaunaka Rishi Das commented, "With the blessings of Acharya Swamishree Maharaj, the project will definitely be a success. Your presence is our great blessing."

Acharya Swamishree Maharaj made a donation to the OCVHS so that their valuable work can continue.

History of the Bodleian Shikshapatri

During the early Nineteenth century, the northwest region of India was a lawless territory. Bandits and gangsters ruled the area with an iron fist and anyone who stood in their way was attacked, tortured or killed. Mobs roamed the districts stealing property and destroying people’s lives. Rape was commonplace and the bandits stooped to the lowest imaginable levels. The British Raj at the time was at a loss. It appealed to the gangs through discussion, deals and finally with the power of the gun. Despite all their efforts they failed.

From Samvat 1886 (1830 AD), Posh Sud 2, Lord Swaminarayan started to show signs of illness in His body. He stopped taking food and gradually started to lose weight. Lord Swaminarayan predominantly stayed within the 4 walls of the Akshar Ordi in Gadhada. Bhaguji Parshad, Mulji Brahmchari, Surakhachar and another 30 sants remained in the Lord's service day and night.

Lord Swaminarayan granted the wishes of Mr Blane and Sir Malcolm and gave leave to the fever in His body. On the third day, Lord Swaminarayan travelled from Gadhada to Rajkot sitting in a mena (carriage), accompanied by a group of sants and disciples.

Sir Malcolm then asked Lord Swaminarayan to explain the main principles of the Swaminarayan Sampradaya and then enquired, “I hope you do not face any obstructions in your religious activities from our administration?” Lord Swaminarayan replied, “Not many. If you protect the cow and the Brahmins, your rule shall last for many years.” Sir Malcolm the said, “Our government has decided to ban sati (the burning of widows on their husbands funeral pyre) and dudh piti (the drowning of female new-borns in milk). What are your views on this?” Lord Swaminarayan, who had already banished these rituals in the Swaminarayan Sampradaya, replied, “One should never commit suicide. After the death of one's husband, one should accept the Lord as a husband, but never commit suicide. Also, one can never be allowed to commit infanticide.” The Governor became extremely pleased to hear this. He said, “Lord Swaminarayan, you have given me precious advice.”