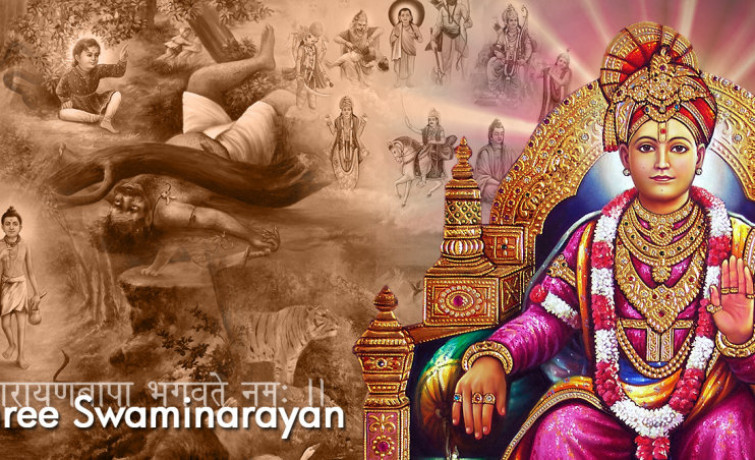 The ongoing biography of Lord Shree Swaminarayan from the December edition of Shree Ghanshyam Vijay.

The Subservient Devotion of Muktanand Swami

The almighty Lord Shree Swaminarayan presided in Sarangpur and fulfilled Jeevakhachar’s spiritual desires. He then decided to leave and visit another village. Shree Hari called Muktanand Swami and said to him, “Swami! Take a group of sants and travel from village to village in order to preach about our supreme Faith. Tour the regions around Zalavad, Dandhavya and Charotar. You are one of My own limbs. You are another embodiment of Me. The great benefit amassed from My darshan is also acquired by devotees through your darhsan. Just as devotees offer adoration to Me, they too will perform these acts of worship to you. The divine bliss that they enjoy from My darshan will be experienced through your darshan. Therefore, you must quickly go to those lands. I have not travelled in that region for a long time. The devotees will be pining for My darshan. Go to them and relieve them all from their pain of separation from Me.”

As the Lord said these words, Muktanand Swami became extremely emotional and tearful. The Lord was showing him so much love and admiration. Muktanand Swami said, “Oh Maharaj! I am ready to do whatever you command. You are the one who fulfils all our deeds. That in itself is our great fortune. The only thing that I ask from You is that I am able to completely fulfil the task that You desire from me. This is the sole aim of my entire existence.”

Muktanand Swami made all the preparations for his journey. Before he departed, he went for Shree Hari’s darshan. Shree Hari said, “Come Swami! I will escort you to Horidhar.” Swami pleaded, “Oh Maharaj! There is no need for You to endure so much trouble.” However, due to His deep affection for Muktanand Swami, Shree Hari insisted, and accompanied Muktanand Swami all the way to Horidhar with Jeevakhachar and some parshads. When they reached Horidhar, Shree Hari said to Muktanand Swami, “You are not allowed to speak in reaction to whatever I am about to do.” Shree Hari dismounted from His mare Roze and performed five circumambulations (pradakshinas) around Muktanand Swami. The deeply embarrassed Muktanand Swami could do nothing as the Lord had commanded him not to speak. However, when Shree Hari started to prostrate to him, Muktanand Swami could not refrain from reacting any longer. He grabbed Shree Hari’s hands and made Him stand. Muktanand Swami pleaded with Shree Hari, “Have mercy on me and do not embarrass me any more.” Shree Hari replied, “Swami! Allow Me to perform prostrations to you.” But Muktanand Swami continued to lovingly hold Shree Hari in his arms and did not allow the Lord to fall at his feet again. Muktanand Swami implored, “Oh Maharaj! You are the sovereign Lord of infinite cosmoses. You are the incarnator of all the incarnations (Sarvavatari). In comparison to You, we are all insignificant beings. Still, You mercifully look after us and shower Your immense bliss over us. You are the force behind every one of our actions. All our deeds are accomplished due to Your will and the strength given by You. Still, You allow us to take the credit for the actions.” Shree Hari replied, “You are an extremely great sant. A sant like you cannot be found elsewhere in the entire universe. You constantly remain vigilant to behave in accordance with My explicit will. Due to Me, you have to endure much suffering and have abandoned women and wealth. Irreverent people ridicule you and insult you. Still, you tolerate all this torment. By My command, you have also rejected lavish food and drink.” Swami said, “Maharaj! We are merely Your humble servants. You consider each of our small, insignificant deeds to be great and show us Your immense pleasure as a result. Have mercy on us so that we never forget Your benevolence and divine grace.” Shree Hari then embraced all the sants who were accompanying Muktanand Swami. All the sants devotedly bowed down to Shree Hari and departed.

In order to please all the devotees, Shree Hari would visit Lake Utavari to bathe each day. One day, the devotees said that there was a deep water lake to the north of the village where they should go instead because it was more fun to dive in the deep water of that lake and swim in its rapids. To please them all, Shree Hari gave permission to go to the other lake. Shree Hari became pleased when He saw the lake and immediately dived in. He played games with all the sants and devotees in the water and delighted everyone. All the sants and devotees were chanting the Lord’s name and singing kirtans in praise of Him whilst they bathed. After a short while, the kathis got carried away with their games and moved far away from where Shree Hari was bathing. The sants remained where Shree Hari was swimming. Shree Hari came out of the water, followed by the sants and got changed into dry clothes.

Eventually, the kathis got tired of playing and also came out of the lake. After getting dressed, they went to where Shree Hari was sitting. As they bowed down to touch Shree Hari’s lotus feet, Shree Hari pulled His foot away and said, “You all are unclean so do not touch Me.” The kathis were surprised at this and questioned, “Maharaj! We have just bathed in the lake. Why are You saying that our bodies are unclean?” Shree Hari explained, “You bathed in water, but without the remembrance of the Lord. Even if you perform great, noble deeds, if you forget the Lord whilst performing them, they are all worthless. If you perform adoration to the Lord but your mind is wandering elsewhere, you might as well not have performed the worship. Without the remembrance of God anything that you do, such as taking oaths, performing austerities, chanting, holding ceremonies, reciting scriptures, performing the mental worship of the Lord, etc. is all futile.” The kathis realised their mistake and pleaded to Shree Hari for forgiveness. They all returned to the lake and bathed, whilst remembering the Lord’s murti. Once again, they went to the Lord and bowed down at His lotus feet. Everyone took a solemn oath that in future, they would keep a remembrance of Shree Hari whilst bathing and performing all other deeds. In this manner, Shree Hari showered His immense divine bliss to the devotees and at the same time, imparted the teachings of true manners, decency, spiritual knowledge and morality to them all.