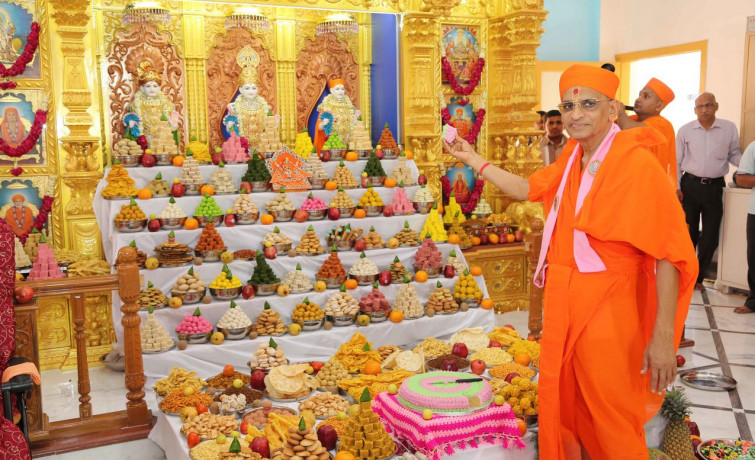 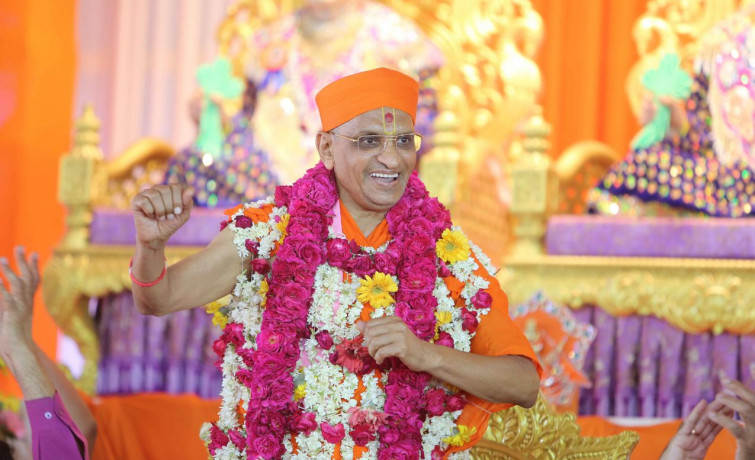 A 3-day mahostav in the city of Kalol

Sitting on the banks of the Sabarmati River, in the Gandhinagar district of Gujarat, is the industrial city of Kalol.

Kalol is central to Gujarat’s 3 major ‘Mega’ cities – Ahmedabad, Gandhinagar and Mehsana. Therefore, it is a very important rail and road transportation hub.

For many years, the devout disciples of Kalol had been searching for suitable land within the city for a new Mandir to be built. Finally, with the blessings of Acharya Swamishree Maharaj, a large plot of land was purchased on the main artery road of Kalol, and on Monday 24 March 2014, Acharya Swamishree Maharaj performed the Shilanyas Ceremony of the new Mandir. Within just 12 months, construction of the magnificent Mandir was completed, and a 3 day festival was held from 23 to 25 March 2015, to mark its grand opening.

During the morning of Monday 23 March 2015, Acharya Swamishree Maharaj commenced the scripture recitals and the Murti consecration ceremony. During the evening, a concert of devotional songs was presented by Mumbai’s musical maestro, Shri Rajendra Pala.

During the morning of Tuesday 24 March, the conclusions of all the scripture recitals were held. During the afternoon, a grand procession was held during which the supreme Lord Shree Swaminarayanbapa Swamibapa and Acharya Swamishree Maharaj presided upon 4 ceremonial elephants. The spectacular procession brought delight to the thousands of Kalol’s citizens.

On Wednesday 25 March, Acharya Swamishree Maharaj performed the Pratishtha ceremony and installed the divine Murtis of Lord Shree Swaminarayanbapa Swamibapa and the Lord’s sacred lineage of spiritual heirs in a golden sinhasan. A lavish array of food in the form of a grand annakut was offered to the Lord and disciples were given the opportunity of performing aarti.

Throughout the festival, thousands of disciples and people from the entire Mehsana region had flocked for the divine darshan of the Lord and to gain the blessings of Acharya Swamishree Maharaj. It is estimated that in any single day, over 35,000 meals were provided – this was given to anyone who came, regardless of who they were, or what their creed or background was.

As part of the charitable event of the Mahotsav, a blood donation camp was held for all 3 days, during which over a hundred and fifty units of blood were collected. Free medical diagnosis clinics were provided so that people who could not afford medical care were given treatment.