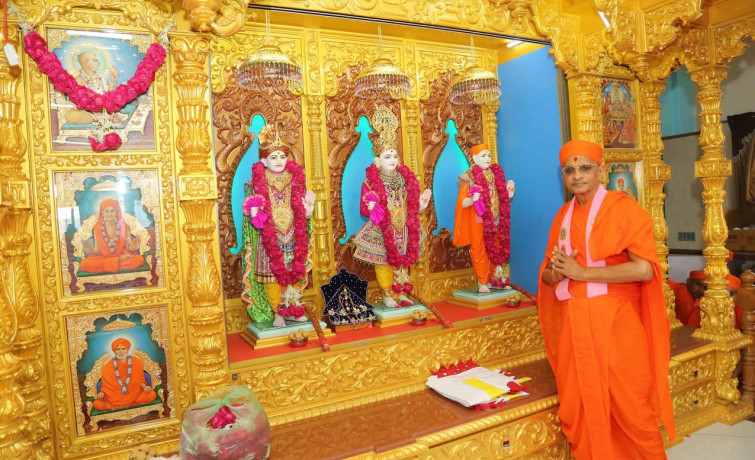 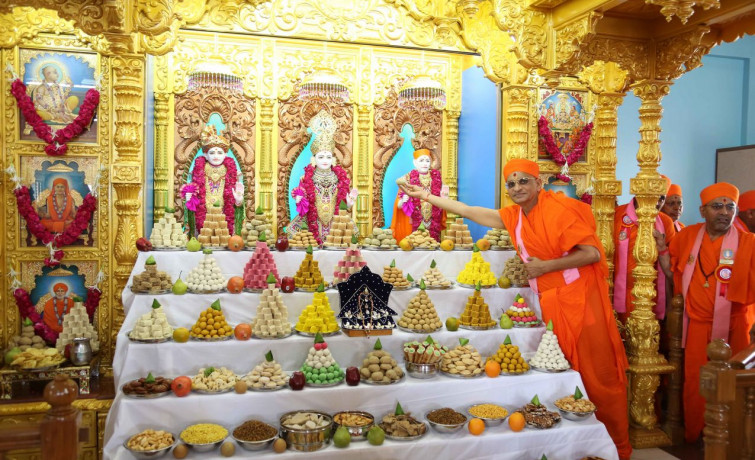 Ranip is now a suburb of Ahmedabad. Until the late 1960’s it was a separate village, but with the rapid development of Ahmedabad as a ‘Mega’ City, and substantial investment by different national and international companies, Ranip forms a part of Ahmedabad. In the past decade, Ranip has expanded further and joined with the nearby Kaligam village, which is now called New Ranip.

For many years, the devout disciples of Ranip had gathered together in each other’s homes on celebration days for worship and prayers. Their dedication and humble services offered at the time of major celebrations of Maninagar Shree Swaminarayan Gadi Sansthan is truly admirable. However, it had always been a desire within them all that a Mandir would be built in their region so that they could worship the almighty Lord Shree Swaminarayanbapa Swamibapa and please Acharya Swamishree Maharaj through their devotion.

Eventually, Acharya Swamishree Maharaj conceded to their prayers and a large plot of land was purchased within the new conurbation of Ranip. Construction of the magnificent Mandir was completed rapidly and a 3 day festival was held from 1 to 3 April 2015, to mark its grand opening.

During the morning of Wednesday 1 April 2015, Acharya Swamishree Maharaj commenced the scripture recitals and the Murti consecration ceremony. During the evening, Swamibapa’s highly talented Sants performed devotional songs, after which the disciples of Ranip enacted an episode of Sadguru Shree Gopalanand Swamibapa’s life, when he freed people from their beliefs in black magic and superstition, and ensured they had sole reliance, faith and dedication towards the supreme Lord Shree Swaminarayan alone.

During the morning of Thursday 2 April, the conclusions of all the scripture recitals were held. During the afternoon, a grand procession was held during which the supreme Lord Shree Swaminarayanbapa Swamibapa and Acharya Swamishree Maharaj presided upon 4 ceremonial elephants. The spectacular procession progressed throughout Ranip and the Sabarmati region of Ahmedabad, before returning to the new Mandir complex.

On Friday 3 April, Acharya Swamishree Maharaj performed the Pratishtha ceremony and installed the divine Murtis of Lord Shree Swaminarayanbapa Swamibapa and the Lord’s sacred lineage of spiritual heirs in a golden sinhasan. A lavish array of food in the form of a grand annakut was offered to the Lord and disciples were given the opportunity of performing aarti.

During the closing ceremony, the disciples of Ranip brought a large garland of sandalwood that they had made themselves, and presented it to Acharya Swamishree Maharaj. The joy and delight of the Sants and disciples could not be contained, as everyone in the assembly stood up and danced to the new kirtans released by our Sansthan.