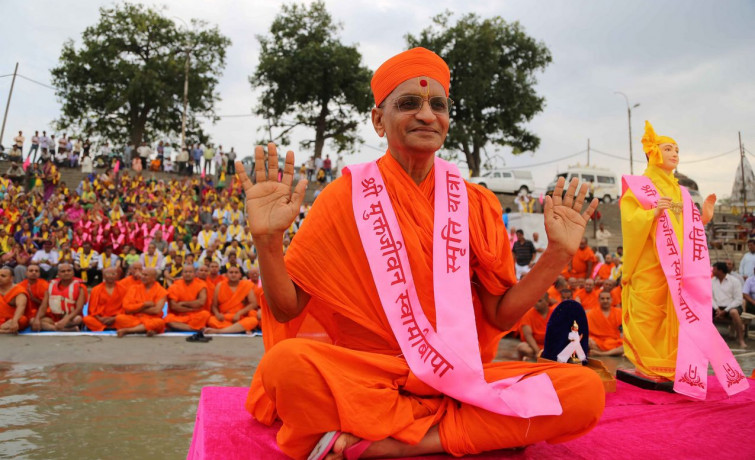 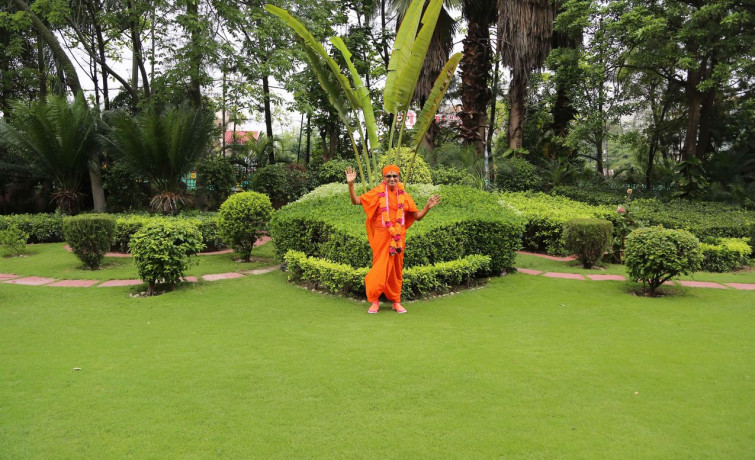 Shree Muktajeevan Smruti Yatra commenced from Maninagardham. Disciples travelled by coach, train and plane and reached the city of Ayodhya by 7 April 2015.

For the eternal salvation of infinite many souls, the supreme, Purna Purushottam Lord Shree Swaminarayan manifested upon this Earth in the holy village of Chhapaiya near Ayodhya. This entire region of Northern India has become a sacred site of pilgrimage for disciples of the Swaminarayan Faith.

From Friday 9th March to Sunday 1st April 1973, Gurudev Shree Muktajeevan Swamibapa led a group of disciples on a salvation-granting pilgrimage (Moksh-dayi-yatra). The aim of this pilgrimage was to bestow eternal salvation to innumerable souls. The entourage of twenty-two coaches of Sants and disciples visited the sacred sites around Northern India.

Forty-two years after Swamibapa’s Mokshdayi Yatra, His Divine Holiness Acharya Swamishree Maharaj led a group of 400 Sants and disciples on a journey to Northern India. During the pilgrimage, they re-visited the sacred sites that Swamibapa blessed in 1973, and Lord Shree Swaminarayan sanctified over 200 years ago.

The pilgrimage, named Shree Muktajeevan Smruti Yatra commenced from Maninagardham. Disciples travelled by coach, train and plane and reached the city of Ayodhya by 7 April 2015. Here, they visited Sadguru Shree Ramanand Swami’s site of manifestation, the house where Shree Ghanshyam Maharaj lived, the famous shop where He ate all the sweets in exchange for Suvasini-bhabhi’s ring, the site where the evil Kalidatt was slain, as well as the Ram-janma Bhumi. The pilgrims had a tour of the River Saryu, where Shree Ghanshyam Maharaj used to bathe and play in His childhood, and then an assembly was held on its banks. Acharya Swamishree Maharaj ceremonially bathed Shree Ghanshyam Maharaj in the River Saryu, and then everyone took a ritual bath in the holy waters.

On 8 April, the pilgrims visited Chhapaiya, and visited the site of Lord Shree Swaminarayan’s exact manifestation site. An assembly was held at the exact site where Gurudev Swamibapa sat and gave ashirwad 42 years previously.

From Ayodhya, the pilgrimage continued to Varanasi. This is also known as Benares and Kashi. It stands on the banks of the sacred River Jamuna. Kashi is known as the most revered site of spiritual learning. When Gurudev Swamibapa came to Kashi in 1973, the eminent scholars held a special assembly in honour of Jeevanpran Swamibapa. During this extraordinary assembly, the Mayor of Banaras presented the City Award to Jeevanpran Swamibapa. The scholars presented Jeevanpran Swamibapa with two honorary titles, ‘Ved-shastra-sanrakshak’ (protector of the ancient sacred Hindu scriptures) and ‘Vishwa-dharma-chudamani’ (jewil in the crown of the world’s religions). The great scholars of the Vedas performed the Vasant Pooja to honour Jeevanpran Swamibapa. A magnificent procession was held through the streets of Kashi – Banaras, with Jeevanpran Swamibapa presiding on an elephant.

After the assembly, all the pilgrims reached Allahabad, where they held ritual bathing at the site of the Triveni Sangam, where the River Ganges, River Jamuna and the hidden River Sarasvati converge.

Acharya Swamishree Maharaj returned to Luknow on 12 April and reached Maninagardham on Monday 13 April 2015. Some of the Sants and disciples continued the road journey from Allahabad and visited Vrundavan Mathura, Jaipur, Agra, Pushkar, Udaipur, and reach Maninagar on Thursday 16 April 2015.