Let's Bat to Save The Children 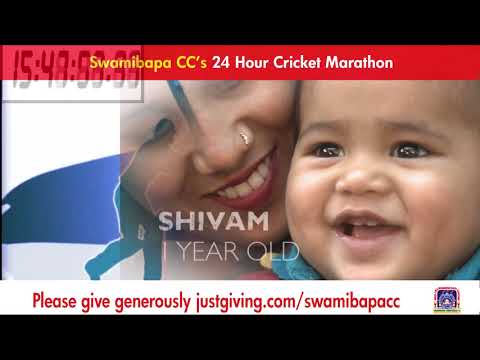 Swamibapa Cricket Club is proud to organise, ‘Let’s Bat for Save the Children’ – a 24-hour cricket marathon to raise funds and awareness in support of the global charity. This event forms part of the fundraising programme in aid of STC as part of the  festival.

Jeevanpran Swamibapa, the inspiration behind Swamibapa CC, was an ardent advocate of sports, not only as a means to stay healthy, but as a way to develop important skills and values such as teamwork, leadership, perseverance, excellence, humility and unity. Through the spur of Acharya Swamishree Maharaj, Swamibapa CC has gone from strength to strength, and in thanks for that encouragement, the Club is giving back to the community and society through this event.

The event will be 24 hour, non-stop marathon with several consecutive matches, running from 0900-0900 over 9th – 10th December 2017. All ages, abilities and genders are welcome. Even if you are not playing, you can support us by highlighting the event and therefore raising the profile of Save the Children, by donating to the Mandir’s Save the Children campaign page www.justgiving.com/KingsburyMandir, or by simply coming along and cheering on the participants for their herculean efforts.

Participating teams will have six players each, and play single-innings matches of 5 overs – the winner of the tournament will be the team that has racked up the most wins through the marathon.

A short history of Swamibapa CC

The Club was inspired by, and named in honour of, Jeevanpran Shree Muktajeevan Swamibapa, who established Maninagar Shree Swaminarayan Gadi Sansthan.

Jeevanpran Swamibapa only instructed his disciples to practice devotion to Lord Shree Swaminarayan, and remain moral and upstanding observers of the faith, wherever in the world they resided - He also encouraged them to take care of their physical wellbeing. This is because devotion to God can only be performed if one’s physical body is healthy and fit. He made it part of everyone’s daily rituals to perform meditation, exercise and Yoga.

The history of Swamibapa Cricket Club dates back to the 1970s, when it was established in Nairobi-Kenya. Jeevanpran Shree Muktajeevan Swamibapa inspired and encouraged His disciples to form a cricket club and recruit and nurture players from all religions, colour and caste to the club – as a means to promote the values of the Sanstha. Over the years, Swamibapa Cricket Club Nairobi flourished and won many major tournaments, and at one point had 9 players from the Club representing the Kenya national team at the ICC World Cup. Swamibapa Cricket Club Nairobi is currently one of the leading cricket clubs in the country with several players still representing the nation at international level.

Building on the foundation of the Club established by Jeevanpran Swamibapa, His Acharya Swamishree Maharaj constantly encourages Swamibapa CC to contionue to develop and thrive, and with His blessing the club aims to grow both in numbers as well as standards, quality and excellence. The aim of the Club is to promote the Sanstha as well as the game of cricket, and to give young disciples around the world to opportunity to learn, develop and play the wonderful game.