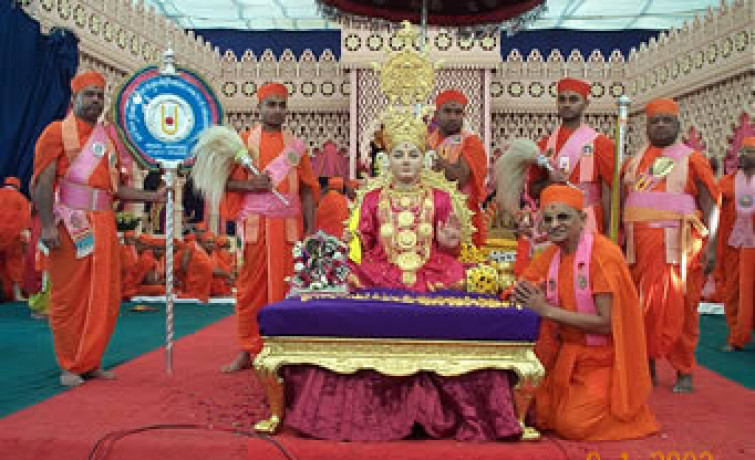 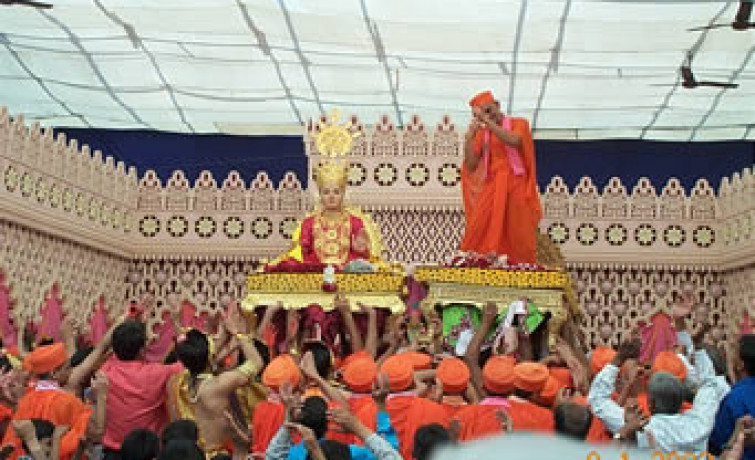 "Oh Ghanshyam, your divine darshan fills our hearts with love....."

On this, the final day of the Mahotsav, the temple was again brimming as the devotees awaited the Lord's divine darshan. As the doors of the singhasan were pulled back for the Shangar aarti, Shree Ghanshyam Maharaj was resplendent, with a red and golden chogla vari paag, golden kundal, and turquoise green vaghas. In His right hand the Lord held a pale orange handkerchief, in his left hand was a golden punjo. His Divine Holiness Acharya Swamishree performed Shangar Aarti. Thereafter Acharya Swamishree and the sants prepared to go to Shree Swaminarayan Tower.

"Swaminarayan Gadi, Swamibapa" dhoon was playing sweetly in the background, filling the cool air of the early morning. The ornately decorated chariot for the Swagat Yatra was brought from the temple to the tower, pulled by the Lord's beloved sants and devotees.

Atop the magnificent chariot was Lord Swaminarayan seated upon his divine throne, Shree Swaminarayan Gadi. He was adorned in a Pink Paag with blue kalanki and strings of pearls and dark Pink Vaghas. In His right hand, He held a bright yellow handkerchief.

"The performances we have witnessed were unique......"

"This Mahotsav has come to an end. During the preparations and the Mohatsav neither the Sants or devotees have thought of sleep, hunger, nor thirst....."

"This ekadasi is a very auspicious day. Lord Swaminarayan announced His name to the world on this day 200 years ago....."

"Yesterday, the Vishva Shanti Yatra was a peace loving yatra of Lord Swaminarayan. Permission was granted to for this yatra where normally it is impossible to obtain....."

"Thousands of people got the divine darshan and heard the dhoon of Ohm Shree Swaminarayan Bapa Swami Bapa Bhagwate Nahmaha. How peaceful it sounded. This yatra was of love, devotion and unity....."

Prathana: "O Swaminarayan Bapa Swamibapa, whosoever did Your darshan yesterday, make it your task and grant each and every one of them eternal salvation....."

"At Swaminarayan Gadi, Jeevanpran Swamibapa was the One who inspired His devotees to excel themselves to perform new and unique seva....."

HDH Acharya Swamishree described all the seva that the supreme Sants and devotees performed, and informed them all that Lord Swaminarayan and Jeevanpran Swamibapa is very pleased with them.

"Many devotees around the world including London and Nairobi contacted Maninagar to thank us for the live broadcast. They said that even sitting at home, they felt they had taken part in this supremely auspicious occasion....."

"Whoever sang a kirtan at night, Swamibapa used to be very pleased with them and hug them. So to please the Lord, you should sing a kirtan every night just before you sleep....."

"In preparation for Swamibapa's Satabdi Mahotsav, the next 25 kirtans have been published. For 61 days, Swamibapa went into meditation. During this period He had decided to end his divine sport. But because of the love and devotion of the Sants and devotees he would leave behind, He decided to come back......"

"We must carry on with this kirtan bhakti, parayan reading, etc, until our last breath. If you do 9-fold bhakti, you will attain divine bhakti....."

The main committee members of Swaminarayan Gadi Sansthans from around the world, were invited to adorn the lotus feet of Lord Swaminarayan and HDH Acharya Swamishree with fresh fragrant flowers. As the kirtan 'Avo Avo Sahajanandji' started to play for this ceremony, the Sants picked up and lifted high into the air, both Shree Swaminarayan Gadi with Lord Swaminarayan seated upon it and the Gadi upon which HDH Acharya Swamishree was seated. HDH Acharya Swamishree, overcome with emotion, could not hide His feelings any longer and rose to stand on His Gadi. As the music continued, His Divine Holiness elatedly danced upon his Gadi. His beloved children in the Sabha were ecstatic, having been witness to an unprecedented occurrence. The sabha was initially overwhelmed but excitedly joined in the dancing, everyone jumping up waving their hands as they joined HDH in the frenzied atmosphere being generated. Seeing this, HDH Acharya Swamishree sang and danced even more. And His beloved children had to reply by clapping their hands in the air. Each and every individual felt as if they were dancing with the Lord.

HDH Acharya Swamishree opened His arms to the sabha and collectively 'hugged' everyone, each and everyone in the congregation hugged him back. The unforgettable, Akshardhamno Amrut. Fountains of love were flowing. There were many devotees in the congregation who had heard of similar laabh in America and were waiting for their chance to experience such laabh. Today, the Lord gave them much much more; He gave them his Murti, as it is in Akshardhaam surrounded by all his Anadi muktas, and they experienced the happiness and contentment of being at one with the Lord. The way the Lord gives His Anadi Muktas Amrutno Raas in His Murti, is exactly what the sabha witnessed today. Each and every member of this sabha was given this Amrut to drink.

Comments of the Day

"I have seen many Acharyas in life time, but none can match HDH Acharya Swamishree. He is as sweet as a child, with extreme knowledge and is a part of the Supreme Guru Parampara of Shree Swaminarayan Gadi. Oh my beloved Swamiji, even though you are so great, today the natural love you have for Swaminarayan Bhagwan was experience by us all.
You danced with love just like an innocent young child with your sants, and at that time I felt as if Swaminarayan Bhagwan, himself amongst us.

By seeing todays darshan, which I have never seen in all my life, I truly am blessed......

Oh my Bhagwan! until my last breath, please allow me to remember this divine darshan....."

How blessed were the few children of Lord Swaminarayan who were priviledged to have such divine darshan of Akshardham in Maninagardham with the Lord dancing in front of them. It was divinely magnificent.

Thank you Swaminarayanbapa Swamibapa for allowing me to be present here. I would never have dreamt that I would experience such happiness and drink your amrut in such a manner. As your child you have allowed me to have such laabh, and I pray that you remember me in all the future mahotsavs to come.

"There are no words to explain today's experience, standing and swaying in akshardham....."

"Just being here was overwhelming. Seeing my Bapa dancing with Lord Swaminarayan took my breath away. I pray that I will never forget this divine darshan....." 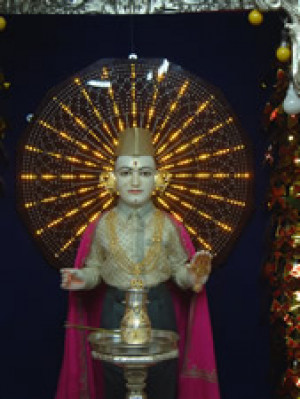 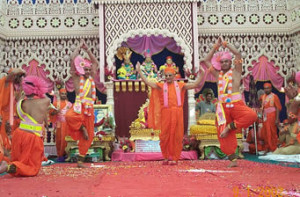 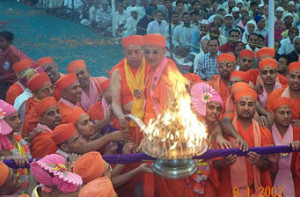 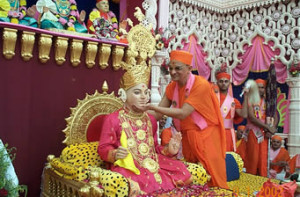 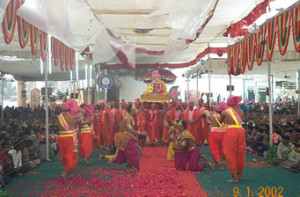 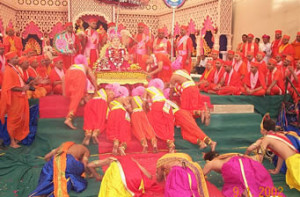