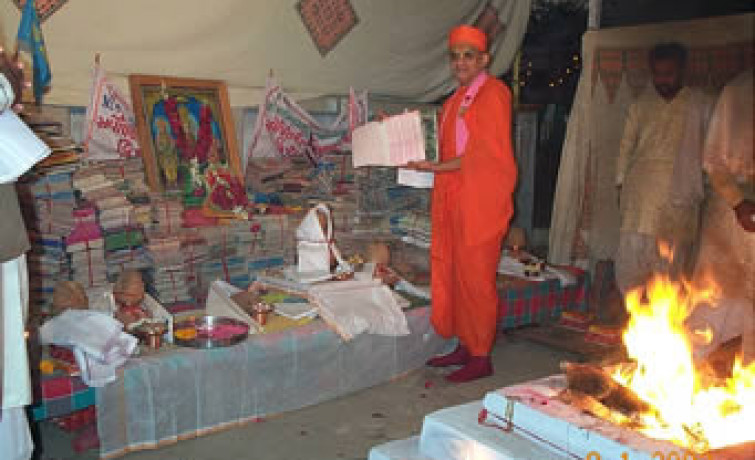 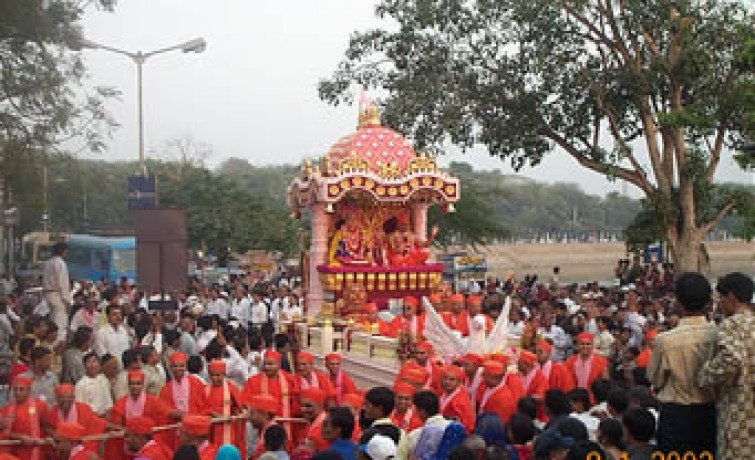 Inside the temple, students of the chatralay and devotees gathered to awaken the Lord and have the divine darsan of the first aarti of the day... Mangla Aarti.

At 5:30am the doors of the singhasan opened, and Ghanshyam Maharaj's radiant tej reached out to all his devotees,

"Oh Ghanshyam, your divine darshan fills our hearts with love....."

A pooja to the Swaminarayan Mahamantra books, written by the devotees, was initiated by Acharya Swamishree.

On this fourth day of the mahotsav, the temple was again full to the brim. The worshippers waited impatiently for the doors of the singhasan to open. The Lord's divine darshan was spectacular. Shree Ghanshyam Maharaj was adorned with a golden and red chogla vari paag, golden kundal and turquoise green vaghas. In His right hand the Lord held a pale orange handkerchief. In the Lord's left hand was a golden punjo.

Sants and devotees waited patiently for the emergence of HDH Acharya Swamishree from the Tower, in anticipation of His darsan.

Shree Muktajeevan Pipe Band saluted HDH Acharya Swamishree whilst He was being garlanded by devotees. This was followed with an aarti.

The procession commenced from the Shree Swaminarayan Tower towards the sabha mandap. The band led, followed by the sants and male devotees, the chariot and finally the ladies.

At the entrance of the Sabha Mandap, HDH Acharya Swamishree was led towards the magnificent singhasan by the band, followed by the devotees offering parayan to Lord Swaminarayan. The Divine Akshardham ni Sabha, had gathered at the Lotus Feet of Lord Swaminarayan.

"We are sitting in Akshardham today, in the sabha as Anadi Muktas....."

"This is your last life, you will only realise this when the time is right....."

"Swaminarayan Bhagwan, Jeevanpran Bapashree and myself are very happy with you.....
Retain the same love as you have now until your last breath....."

"Today, we have gathered here at this divine Akshardham....."

"On the fourth day of the mahotsav, all the devotees of Shree Swaminarayan Gadi Sansthan from all around the world were remembered ....."

"In last night's performances, who ever chanted the Swaminarayan Mantra visualised the murti of the Lord....."

"If you have worldly thoughts whilst meditating, then end the meditation and start chanting the Swaminarayan mantra out loud whilst clapping. Pray to the Lord by asking him to help you drive out these thoughts....."

"A devotee once asked Jeevanpran Swamibapa, 'How should one meditate?';
'With every breath, chant the Swaminarayan mahamantra from within, and all your worldly thoughts will disappear....."

"Muktanand Swami and Lord Swaminarayan's Sants were travelling from town to town, preaching the Lord's glory. It was a cold day and they were shivering.....
Near by was a castle. From within, a young lady saw them and asked her servant to invite them to the castle to stay.....
But the sants refused, explaining that one of the main rules of their Lord, Shree Swaminarayan Bhagwan, was that sants are not allowed reside in any place where ladies are present.....
The sants were fasting on that day. The next day the young lady made some khichadi and sent it to the sants. The sants ate the food, and asked who lived in the castle. It was explained to them that King Ranjitsingh of the Punjab State's had bought the castle for his mistress.
At first the sants were shocked, however this young lady had provided them with food.
No matter how sinful a soul, our Lord and His Sants are truly compassionate...
If a person offers a service to the Lord or His Sants, their sins will be washed away, and their souls will be forgiven and blessed...."
The sants went to the castle and chanting the Sarvopari (supreme) mahamantra "Swaminarayan, Swaminarayan, Swaminarayan.....". The lady was so overwhelmed, that she felt the desire to have darshan of Lord Swaminarayan, so she went in search of the Lord, chanting "Swaminarayan" with each breath....."
Thus, she was cleansed and purified.
King Ranjitsingh went searching for his mistress, and when he found her meditating and chanting Swaminarayan, he also attained peace."

The Nagaryatra began in sparkling sunshine, at Kalupur Railway Station. The massed crowd of participants had gathered at the station and surrounding roads, creating an atmosphere of excitement and anticipation as everyone prepared for the Vishva Shanti Nagaryatra to get underway. A ‘peacock man’ danced away, interacting and entertaining the crowd.

The procession was commenced with a prayer and Sarvopari Swaminarayan Mahamantra recital led by His Divine Holiness Acharya Swamishree. As the lines of participants moved off, the procession was led by flag carriers, followed by dhol players, a chariot seated with sants and dignitaries, a male dance troupe and further sants who walked alongside the chariots.

The first ornately decorated chariot carried Jeevanpran Bapashree and Shree Muktajeevan Swamibapa, who gave their divine darshan to the on looking crowds. This was followed by Shree Muktajeevan Pipe Band playing both Scottish and Indian tunes, fascinating the crowd with their traditional Scottish uniform of kilt, plaid, doublet and feather bonnet.

And then the main attraction; the magnificent chariot serving Lord Swaminarayan and HDH Acharya Swamishree, which was pulled the entire distance of the Nagaryatra by sants and devotees singing the Sarvopari Mahamantra, "Ohm Shree Swaminarayanbapa Swamibapa Bhagvate Namaha".

The last participants in the procession were the women devotees. For the first time, over 200 ladies carried hamayas, followed by the remaining women and children. As with the preceding sections of the procession, they chanted the mantra and sloks, and sang kirtans and bhaghans along the route.

The procession went through Panch Kuva, Khadiya Char Rusta, Raipur Darvaja, Kakaria, continuing through Pushpakunj, Rambaag, Maninagar Railway Station and culminating at Maninagar Temple. At each point thousands of onlookers gathered to receive the darshan of Swaminarayanbapa Swamibapa, and firecrackers were set alight to announce the arrival of Lord Swaminarayan. At Maninagar Temple, the Nagaryatra concluded with a spectacular fireworks display that lit-up the evening sky, as the mass of devotees chanted the Sarvopari Mahamantra, "Ohm Shree Swaminarayanbapa Swamibapa Bhagvate Namaha."

Comments of the Day

"Swaminarayan is the only Sampradya which provides the great book like Shikshapatri. The Hindu is the only religion that inspires us..... "

"This Hindu religion teaches us to act as well as we can. We pray to Bapa that we do not see the sadness which we have witnessed in the events of the Gujarat Earthquake in January 20th 2001....."

"I wish that everyone around the world could live together as one. Seeing this procession, I feel HDH Acharya Swamishree is just like my Guru....."

"The people who have forgotten religion, seeing this divine procession are inspired to become religious....."

"We are so fortunate that we have got the darshan of this Vishwa Santi Yatra, while sitting at home....."

"This type of Shanri Yatra increases devotion and good feelings for God....."

"For the Hindu religion, this is fantastic. It increases unity and breaks down the boundaries between people....." 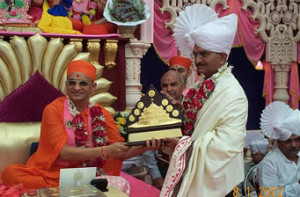 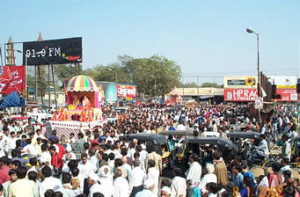 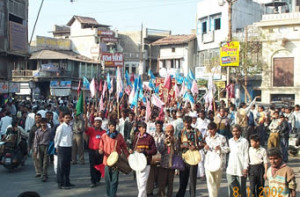 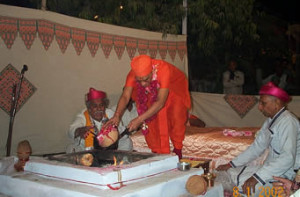 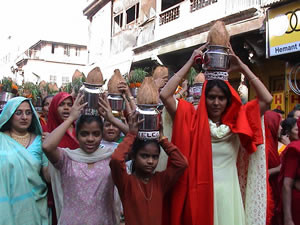 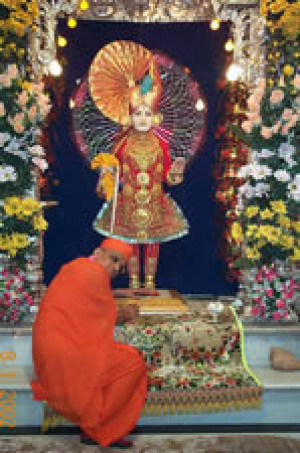