After being installed as spiritual leader of the Faith, Acharya Swamiji Maharaj visited Trent for the first time during the evening of Thursday 25 February 2021

The small village of Trent is situated in the Mandal district of Gujarat. Jeevanpran Shree Abji Bapashree had visited the region on a few occasions with Sadguru Shree Ishwarcharandasji Swamibapa, and consequently, there were several families who strictly followed the Faith here. A highly pious and devout lady called Sankya-yogi Ba Shree Chanchalba lived there with her disciple Sankya-yogi Ba Shree Baluba. Sankya-yogi Ba Shree Chanchalba had a deep understanding of Jeevanpran Shree Abji Bapashree's divine glory. She knew that Jeevanpran Shree Muktajeevan Swamibapa was the true spiritual heir of Jeevanpran Bapashree and remained loyal to Him throughout her lifetime. Accepting the prayers of both pious women, Gurudev Swamibapa visited Trent in 1968 for the first time, and then established a small Mandir in Trent for the ladies of the village in 1971. Ten years later, in 1981, Acharya Swamishree Maharaj established a new temple for men and installed the divine Murtis of Lord Shree Swaminarayanbapa Swamibapa. With Chanchalba's and then Baluba’s encouragement, and financial support, they sent bright, young students of the village to Maninagar, so that they could continue their education from there, and also, realise the greatness of Gurudev Swamibapa. One of the students sent by Chanchalba and Baluba to the Maninagar Boarding was Acharya Swamiji Maharaj.

After being installed as spiritual leader of the Faith, Acharya Swamiji Maharaj visited Trent for the first time during the evening of Thursday 25 February 2021. He was ceremonially welcomed by the villagers. In remembrance of Sad-dharma-ratnakar Acharya Swamishree Maharaj, disciples held scripture recitals on Friday 26 February. As part of the ongoing charitable projects inspired by Him, donations of educational equipment was given to the students of Trent and neighbouring villages. Acharya Shree Jitendriyapriyadasji Swamiji Maharaj also distributed fresh fodder to cattle in the nearby village of Manipura. 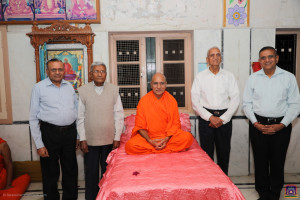 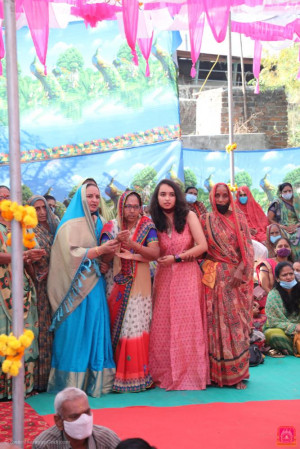 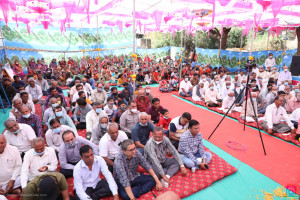 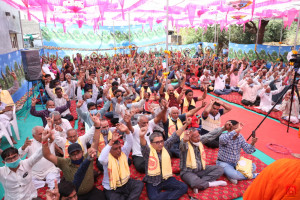