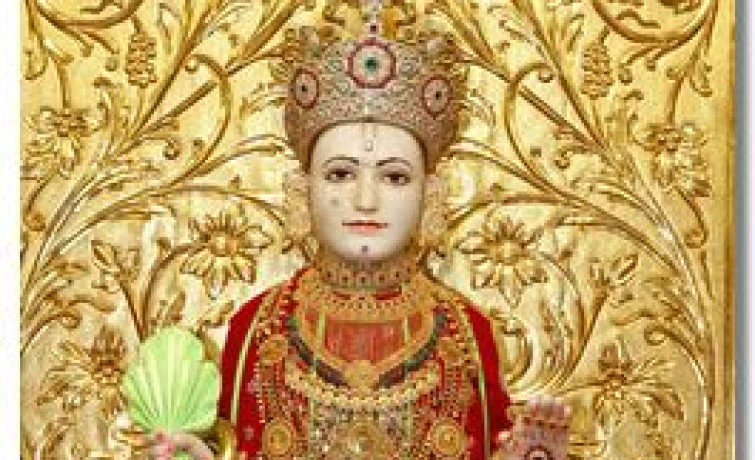 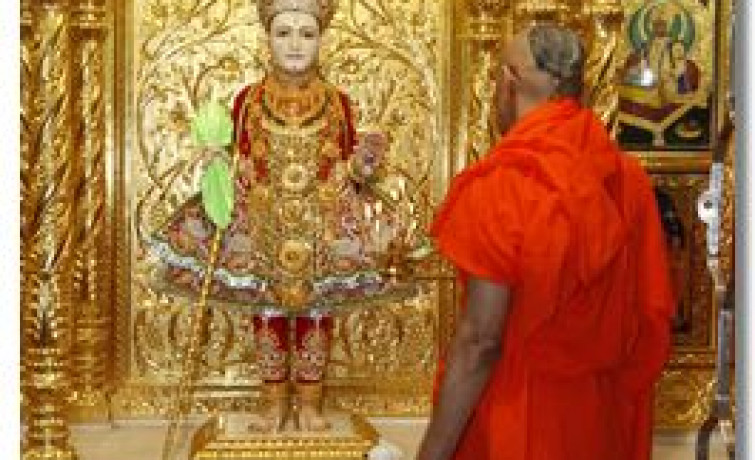 Thursday 23 February 2012, was observed as the Shree Sadguru Din commemorations. This day, Fagun Sud 2, has a special significance in the history of our supreme Karan Satsang. On this auspicious day, in 1972, Jeevanpran Shree Muktajeevan Swamibapa emerged from His 61 day continuous meditation, during which, Lord Shree Swaminarayan Himself commanded Swamibapa to give a physical embodiment to His supreme, eternal, salvation-granting throne, Shree Swaminarayan Gadi.

Two noteworthy individuals of our Organisation were also honoured on this day. Twelve year old Mital, daughter of Shree Bharatbhai Shamji Patadia Soni, received the Rashtriya Virta (Bravery) Award on 26 January 2012, from the Prime Minister of India, Dr Manmohan Singh. When being attacked by a gang of looters, young Mital started to chant the sacred name of Swaminarayanbapa Swamibapa and Acharya Swamishree. With the strength she received from the Lord, she managed to fight off the looters. Together with the award, the Indian Government has pledged to pay for all her educational expenses, regardless of where in the world she decides to study. On this occasion, Acharya Swamishree too showered blessings on this brave young disciple, and donated a significant amount on behalf of the Organisation.

Young disciple Vishaka Rajeshbhai Dhamalia from Surat, came first in the National Gymnastic Championship, held in Vadodara. This was the first time she had entered this level of competition, and still, she surpassed all expectations due to the mercy of the supreme Lord Swaminarayanbapa Swamibapa. An award was presented on behalf of Acharya Swamishree by Honourable Shree G M Chauhan and Trustees.

A cricket tournament had been held recently in Bavla, in which teams of disciples from Vadodara, Maninagar, Kutch, Mokhasan, Bavla, and Swaminarayan Chatralay, had taken part. The team from Bavla won the competition, and was awarded the winning cup by Acharya Swamishree.

The headquarters of the supreme Karan Satsang, the true eternal home of Lord Shree Swaminarayan, is Shree Swaminarayan Mandir Maninagar. In 1944, by the express command of Jeevanpran Shree Abji Bapashree and Sadguru Shree Ishwarcharandasji Swamibapa, Jeevanpran Shree Muktajeevan Swamibapa ceremonially installed the divine Murti of Shree Ghanshyam Maharaj – Lord Shree Swaminarayan. A splendid mango shrove, with a freshwater lake, existed on this site 200 years ago. During His travels in the Gujarat regions, Lord Shree Swaminarayan visited this location on numerous occasions. He used to sit always under a particular mango tree. There, He would sit in quiet contemplation, and become extremely pleased. Sadguru Shree Gopalanand Swamibapa once asked, “Lord! Why do You make detours to visit this particular location? Why do You always sit under this particular tree? Why do You never forget this site? What is its significance? Have mercy and explain why You cherish it so much.” Lord Shree Swaminarayan explained, “In the future, it is from here that My true, eternal philosophy will be spread. I will preside here, and remain here, considering this to be My home.” At the precise site of that particular mango tree where the Lord used to site, now magnificently presides, Shree Ghanshyam Maharaj.

Shree Ghanshyam Maharaj and Shree Harikrishna Maharaj gave darshan without their robes, and were bathed with the five nectars, saffron, yogurt, sugar, honey and ghee. Acharya Swamishree sprayed this Prasad over all the disciples. A lavish array of foods was then presented to the Lord. During His divine blessings, Acharya Swamishree talked about the unsurpassed mercy and divine grace of Lord Swaminarayanbapa Swamibapa. 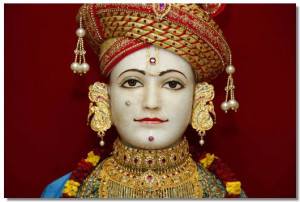 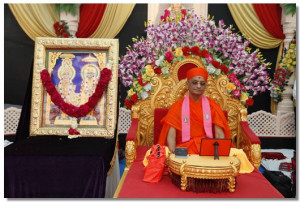 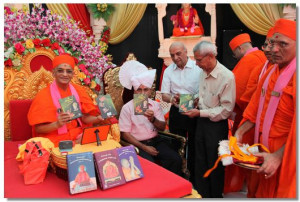 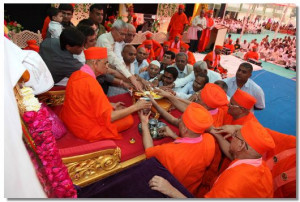 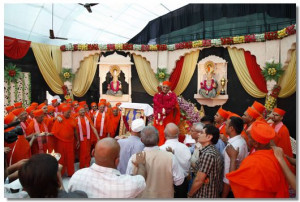 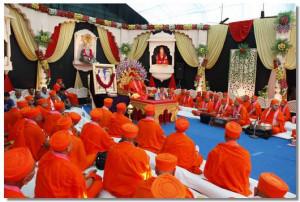