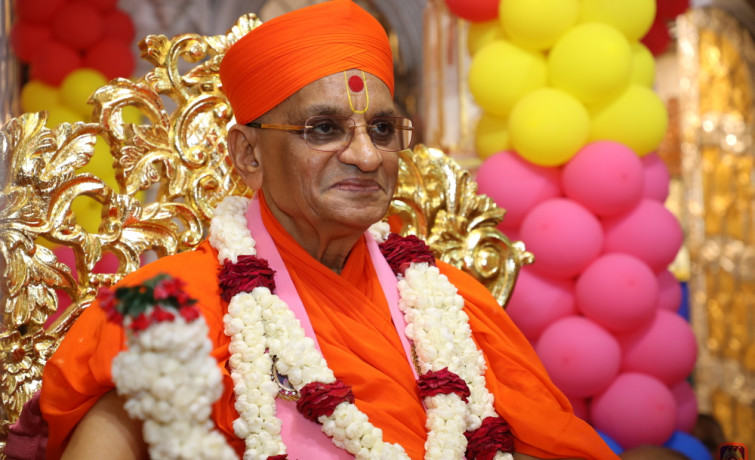 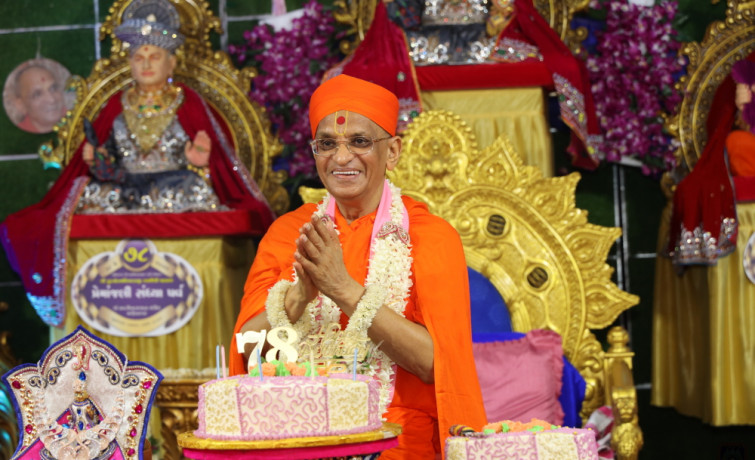 In Maninagardham, in the divine presence of Acharya Swamishree Maharaj, the Sants performed acts of devotion on behalf of the disciples all around the world.

The main birthday celebrations were held during the evening in the Brahm Mahol. Acharya Swamishree Maharaj was led to a specially arranged stage by senior Sadguru Sants, with the accompaniment of devotional music and songs sang by the Sants. The Rajsopchar Poojan was performed to Shree Harikrishna Maharaj and Acharya Swamishree Maharaj, after which names of the disciples living in India and around the world who were to perform Aarti was read. Sadguru Shree Jitendriyapriyadasji Swami prayed to Acharya Swamishree Maharaj on behalf of all the Sants and disciples, to discard the illness that He has been showing since the end of 2019, and give strong, healthy, and joyous darshan once again. That was also the prayer of all the disciples who had held scripture recitals of Shree Abji Bapashree ni Vato on this special day.

Acharya Swamishree Maharaj blessed everyone saying,
“Just as the disciples are watching on-line from around the world, the merciful Lord Shree Swaminarayanbapa Swamibapa is also on-line, and He is viewing the spiritual love, unfaltering dedication, and unsurpassed devotion of the Sants and disciples."

“In the same manner as the key to your home or business can be given only to trustworthy persons, the key to your life should be given to the Lord and His Satpurushs, who are the true trustworthy individual. They key to your desires and soul should be placed at the Lord’s feet. Then, this terribly risky life remains the responsibility of the Lord, and He will ensure you traverse the ocean of this life and reach the Murti of the Lord.”

At the end of the program, the Sants performed Aarti on behalf of disciples.