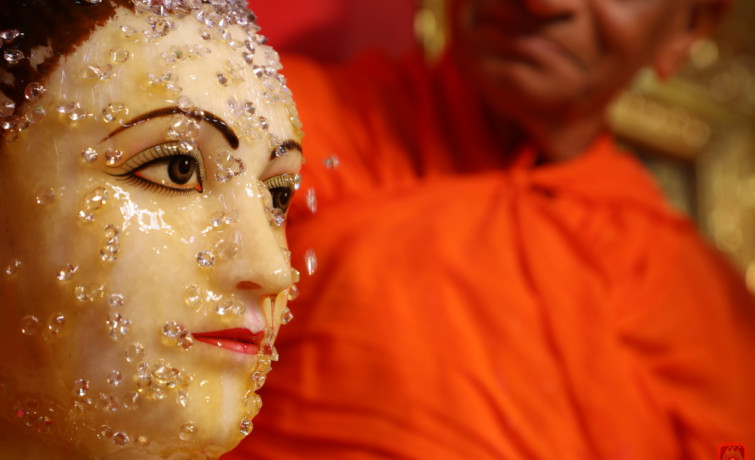 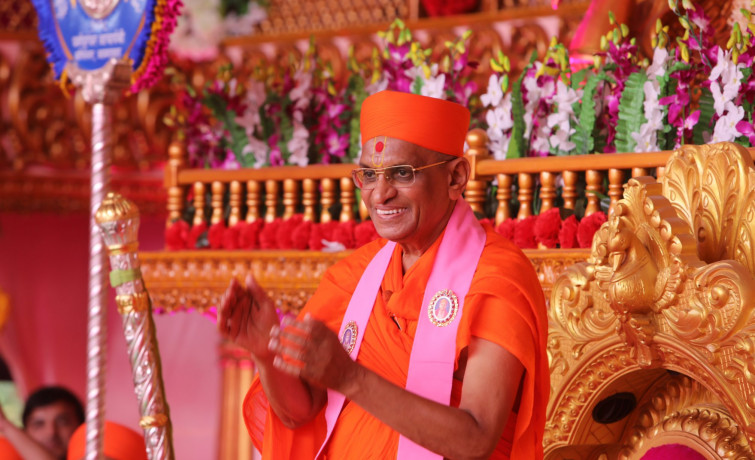 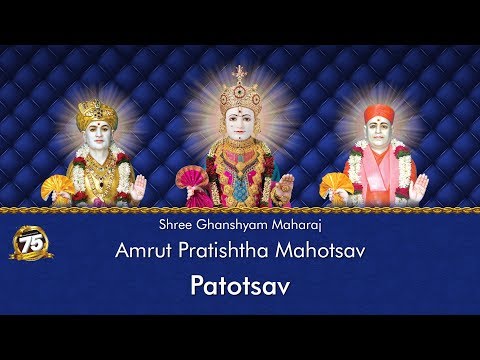 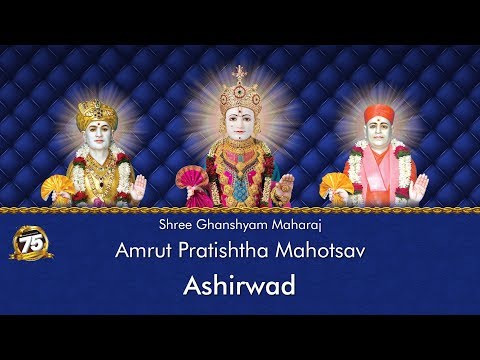 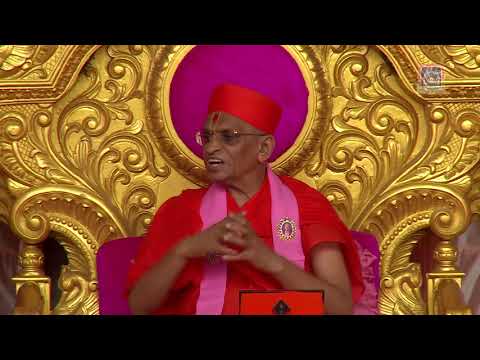 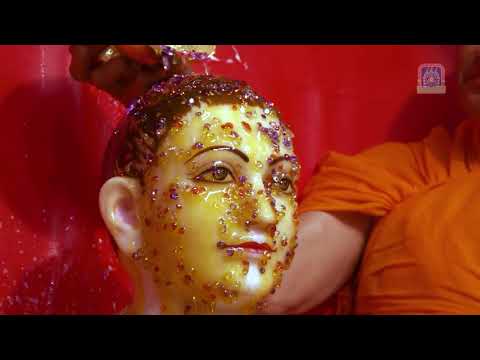 Today, the fifth and final day of Shree Ghanshyam Maharaj Amrut Pratishtha Mahotsav, Maninagar, marks precisely 75 years since, in the year Samvat 2000 (Saturday 26th February 1944), Jeevanpran Shree Muktajeevan Swamibapa installed the divine Murti of Lord Shree Swaminarayan - Shree Ghanshyam Maharaj at the headquarters of the Karan Satsang, Shree Swaminarayan Mandir Maninagar. Thus, Gurudev Swamibapa fulfilled the prophecy of Lord Shree Swaminarayan that the headquarters of His supreme tenets will be built at that exact location in the future, and the wishes of His Guru Shree Ishwar Bapa to create a Mandir there.

The Patotsav celebrations began with Shanghar Aarti being performed by Acharya Swamishree Maharaj, with the Lord looking regal and resplendent, adorned in elaborately brocaded garments and gold garlands and necklaces.

The first kirtan written by Gurudev Swamibapa and presented to Shree Ishwar Bapa was sung before the Lord by all the Sants and disciples – Jay Divya Murti Ghanshyam Tamane Anant Pranam.

Acharya Swamishree Maharaj performed the Patotsav ceremony and aarti to the Lord. Shree Ghanshyam Maharaj, Shree Harikrishna Maharaj, Shree Sahajanand Swami Maharaj and the small Murtis of Shree Harikrishna Maharaj and Shree Lalji Maharaj were disrobed. Of all the amazing spectacles that take place throughout the year at Shree Swaminarayan Mandir Maninagar, this is perhaps the most eagerly awaited and highly anticipated occasion, with it being the only day in the year when disciples are granted the unique darshan of the Lord disrobed.

With the Lord wearing just a dhoti, Acharya Swamishree Maharaj lovingly performed the Panchamrut Snan. This ancient and traditional ceremony involves bathing of the Lord with five nectars; milk, saffron, honey, sugar and yogurt. The Lord was also bathed in silver and gold flowers and then diamonds, rubies, saphires and emaralds, given the significant milestone of 75 years reached today. The Panchamrut was then distributed to all the Sants and disciples as the most special, Amrut (nectar) Prasad.

After the Patotsav ceremony, Acharya Swamishree Maharaj and disciples performed Aarti, before the Sants created a magnificent display of different foods, which was offered to the Lord on this truly delightful day.

During His divine Ashirwad, Acharya Swamishree Maharaj commended all the Sants and disciples who had worked so hard for the Mahotsav preparations. He talked about the unique significance of Maninagardham. In amongst His Ashirwad, Acharya Swamishree Maharaj announced that He would be making another donation of 25 lakh rupees to the Indian Government’s Martyr Fund to help support the victims and families of the recent terrorist unrest. Again, He demonstrated His utmost dedication to Mother India and those working hard to keep it safe and peaceful.

The Ashirwad concluded with everyone standing up, singing and praising the supreme Lord in gratitude for the wonderful memories and divine blessings He has bestowed over the past 5 days.

After Gurudev Swamibapa’s divine blessings, all the disciples were given the opportunity of performing a mass Aarti. Various garlands were presented to Acharya Swamishree Maharaj by Sadguru Sants and Trustees on behalf of different groups who had devotedly created them. 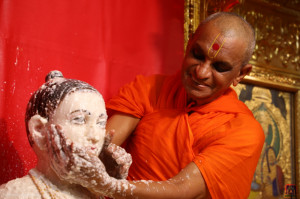 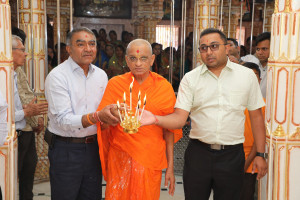 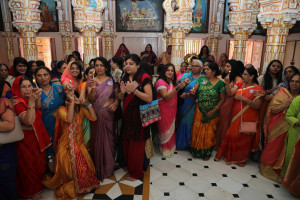 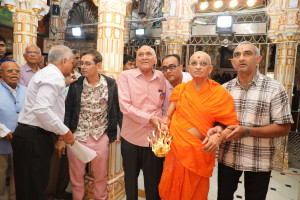 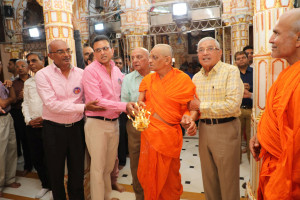 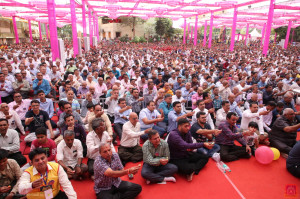