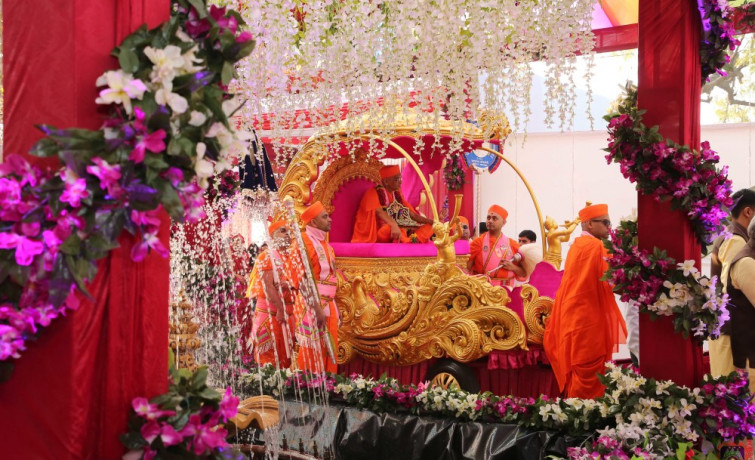 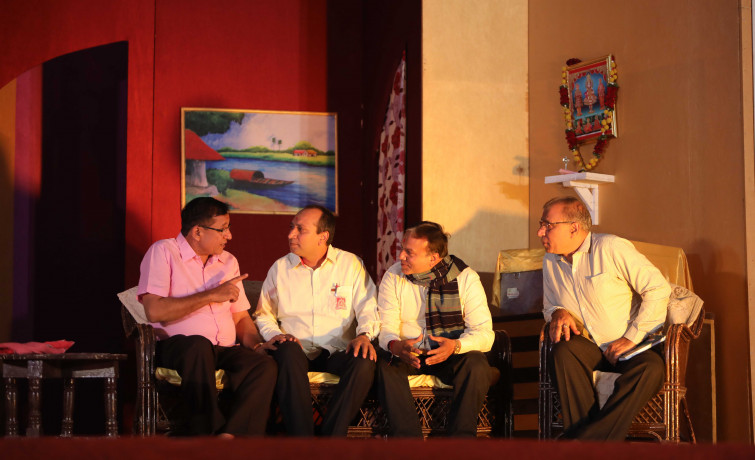 Shree Ghanshyam Maharaj Shatabdi Mahotsav Kadi began on Friday 15th February with the commencement of all the scripture recitals that will take place throughout the three-day festival. Recital of ‘Abji Bapahsree ni Vato’, ‘Shree Swaminarayan Gadi’ and ‘Rahasyarth Pradeepika Tika sah Vachanamrut’ will take place during the Mahotsav. 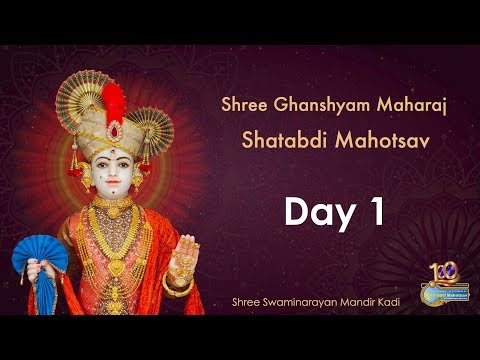 Shree Ghanshyam Maharaj Shatabdi Mahotsav Kadi began on Friday 15th February with the commencement of all the scripture recitals that will take place throughout the three-day festival. Recital of ‘Abji Bapahsree ni Vato’, ‘Shree Swaminarayan Gadi’ and ‘Rahasyarth Pradeepika Tika sah Vachanamrut’ will take place during the Mahotsav.

At 07:45, Shree Muktajeevan Swamibapa Pipe Band assembled a short distance from the Sabha Mandap, eagerly awaiting to escort Acharya Swamishree Maharaj to the Sinhasan on the stage. As soon as Acharya Swamishree Maharaj arrived, the Band paid salutation to Lord Shree Swaminarayanbapa Swamibapa, before leading His golden chariot to the Sabha Mandap.

Sants and hundreds of disciples formed part of the procession, with the day’s sponsoring disciples having the honour and privilege of hand-drawing Acharya Swamishree Maharaj’s along the way. Acharya Swamishree Maharaj soon arrived on the stage, where the Band saluted Him, before He took His place within the gloriously designed sinhasan. The scripture recitals soon concluded, and an especially produced CD of devotional songs (Chittadama Chonti Gayo Re) was released.

Acharya Swamishree Maharaj instigated a two-minute silence for the paramilitary police killed in the bomb attack by militants on their convoy in Indian-administered Pakistan yesterday, before praying for the almighty Lord to give Prime Minister Modi the strength, courage and wisdom to deal with the fallout and aftermath of the cowardly act. He then showered His divine Ashirward on all, as everyone listened attentively to His nectar-filled words. He talked extensively about the history of Kadi Mandir, and how the divine Murti of Shree Ghanshyam Maharaj came to preside in Kadi Mandir 100 years ago.

C.K Patel from the Uma Khodal Charitable Trust was one of the guests today. Acharya Swamihsree Mahraj commended him for the excellent work of his educational trust in helping young children of Gujarat. Reciprocating, C.K Patel praised Acharya Swamishree Maharaj for His remarkable achievements in establishing educational establishments, and said, “I pray to Acharya Swamishree Maharaj for just a tiny amount of His immense strength so that I may provide for the educational needs of those under my care.”  Other guests included Kadi Regional Council President Shrimati Shardaben Patel, several members of the Kadi Municipal Corporation, and a number of news reporters, including Navinbhai Patel of Divyabhaskar, Nisarg Patel of Navgujarat Samay and Vishal Thakor of Gujarat News Channel.

Acharya Swamishree also donated a substantial sum to the Kadi Panjrapol animal sanctuary that He had personally visited the previous day, on behalf of Maninagar Shree Swaminarayan Gadi Sansthan.

The morning’s sabha concluded with everyone taking prasad lunch. 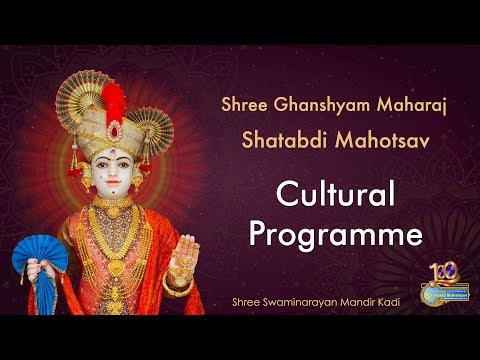 The evening Sabha centred around a religious drama production and included devotional dance performances from the disciples of Kadi.

The story of the drama depicted the relationships between two neighbours: one, a devout disciple of Maninagar Shree Swaminarayan Gadi Sansthan; the other, obsessed by material wealth, regardless of how it was obtained. Due to their values, their respective sons too became like them. One boy wakes early and performs the Lord’s worship; whilst the other stays asleep due to his frivolous lifestyle and is agitated by the sound of the other’s devotional singing.

They grow up and get jobs. The disciple’s son gets work in a town planning office where he is responsible for major building decisions. Due to his religious values, he flatly declines when offered bribes. Even if no-one else finds out, his beloved Lord Shree Swaminarayanbapa Swamibapa and Acharya Swamishree Maharaj would know – and his single aim in life was to please them.

The other son gets a job in a large corporate in Mumbai where he goes to live. Being bereft of morals from his father meant that he was unable to realise right from wrong. He got caught up in an illegal scam for which he was put into prison.

When his father did not hear from him for months, he started worrying. He was completely unaware of what had happened to his son. All of a sudden, the boy turned up and announced that he would be leaving his father forever because he had decided to marry a girl in Mumbai and live there. His father was devastated.

His neighbour appeared just then and consoled him, and said that the way to gain strength and courage was to go to Acharya Swamishree Maharaj and become a disciple of Shree Swaminarayan Gadi.

Having become a disciple, he returned home and spent his time worshipping God instead of remaining obsessing about money. His son returned home and revealed that the story of moving to Mumbai was a fabrication, and had been made up by him and their neighbours to encourage him to become a disciple. Because when he was in prison, he had contacted his neighbour for help; and his friend guided him to seek help from Maninagar Shree Swaminarayan Gadi Sansthan, Shree Swaminarayan Mandir Mumbai. Through his interactions with the Sants of Mumbai Mandir, he realised the error of his ways. He devised the plan so that his father too would realise the greatness of Swamibapa and Acharya Swamishree Maharaj and resort to their divine shelter. In the end, the father did indeed become an ardent disciple and mended the relationship with his son.

The thought-provoking drama was written and directed by Gujarat’s famous actor and performer, Shri Saurabh Rajyaguru. Throughout the performance, the audience was kept engaged with humour, sadness and delight, and without doubt learned important life-lessons – this is the purpose of drama productions such as these. The evening concluded with a number of devotional dance performances by the loving disciples of Kadi and surrounding areas. 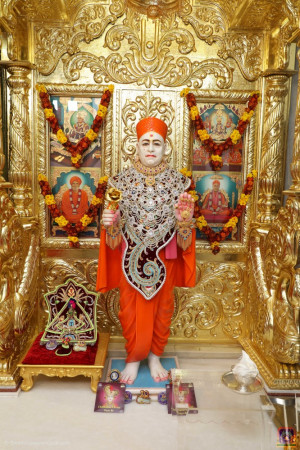 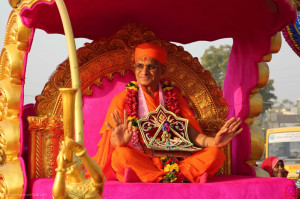 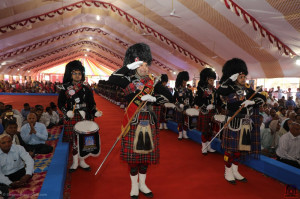 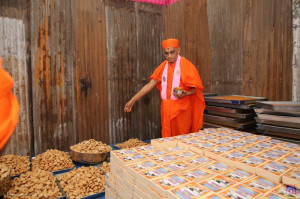 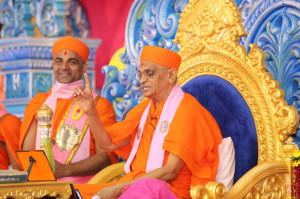 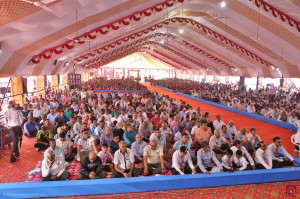