The auspicious event was celebrated with appropriate grandeur at Shree Swaminarayan Mandir Maninagar, in the divine presence of Acharya Swamishree Maharaj.

After performing the Shanghar aarti of Shree Ghanshyam Maharaj, Shree Harikrishna Maharaj, Shree Sahajanand Swami Maharaj, Jeevanpran Bapashree and Jeevanpran Swamibapa, Acharya Swamishree departed from the Mandir and went to Shree Swaminarayan Tower, where He performed the Patotsav ceremony of Lord Swaminarayanbapa Swamibapa who magnificently presides in the Tower.

In His divine blessings, Acharya Swamishree talked about the behaviours that a true child of the Lord should have. 'Ensure that you always have divine sentiments towards the Lord and His eminent Satpurushs. If you perceive them to have human traits, your intellect will have become fouled. In Loya Chapter 18 of the Vachanamrut, Lord Shree Swaminarayan states that a person who has not realised the divinity of the Lord and His Satpurushs becomes perplexed frequently. He repeatedly perceives merits and demerits within God, such as, 'God favours him but does not favour me; God speaks to him more, but does not speak to me; God has more affection for him, but has less for me.' In this manner, he repeatedly perceives merits and demerits in God. Consequently, day by day, that person becomes more dejected from within himself and becomes averse from the Faith. Therefore, one must be sure never to attribute human aspects in God. Also, one must never perceive human aspects in the disciples of God.

'If you are a genuine child of Lord Swaminarayanbapa Swamibapa, you will not create unrest or tension amongst one another. This Shree Swaminarayan Gadi Sansthan, the eternal home of the supreme Lord Swaminarayanbapa Swamibapa - it is our home, and its adherents are our family. A family home is not a court of law. In a court, the letter of the law, i.e. what is right and wrong remains firm, rigid, and paramount - in a family home, compromise and understanding is most important. Do not try to assert your authority over anyone else - if you do, your perceived status will diminish - not by anyone else, but by your own behaviours and conduct. You will be the cause of your own downfall.

'Where there has been an injustice against you, do not record that occurrence in an indelible manner - forget and forgive - that is the manner of thinking that Swamibapa has taught us to have.'

After the divine blessings, disciples performed aarti to Jeevanpran Swamibapa. Prasad was then distributed to all.

The entire celebrations were broadcast live over the internet. 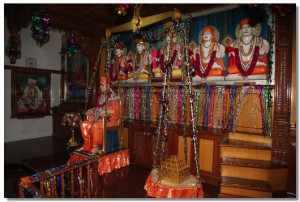 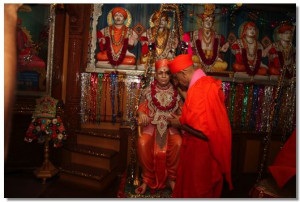 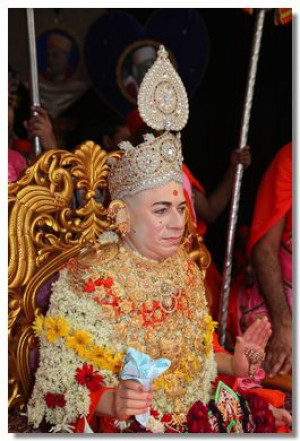 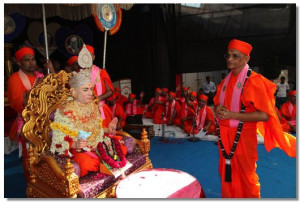 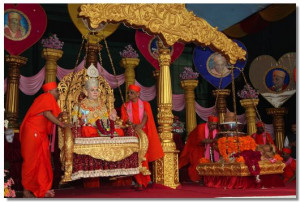 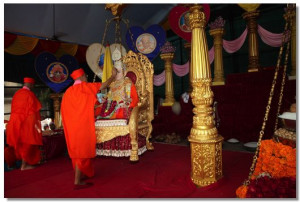