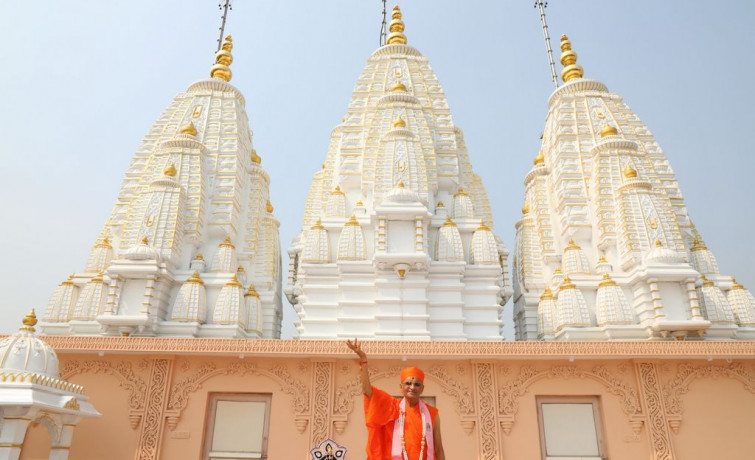 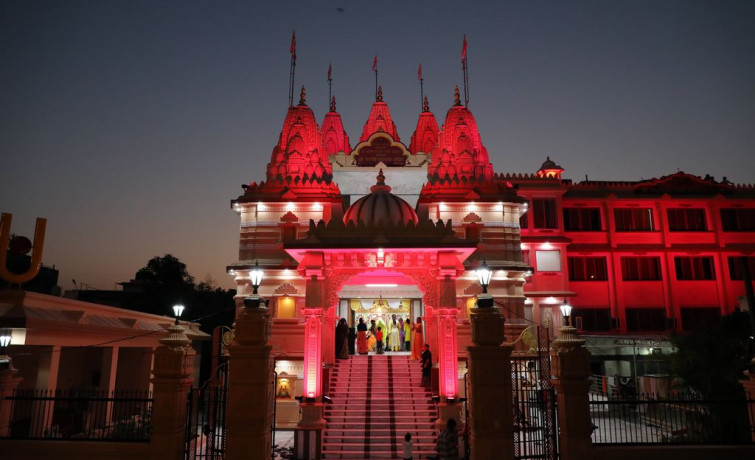 On Wednesday 11 October 1978, Gurudev Shree Muktajeevan Swamibapa inaugurated Shree Swaminarayan Mandir, Civil Lines, Delhi, on the banks of the River Jamuna. The day that He chose for this historical event was the auspicious day of Vijya Dashmi, also commonly known as Dussehra. This day signifies the conquering of good over evil. Most significantly, this was the first Mandir of the entire Swaminarayan Sampraday in the Delhi region and, Gurudev Shree Muktajeevan Swamibapa ceremonially installed the Murtis of Purna Purushottam Lord Shree Swaminarayan, Jeevanpran Shree Abji Bapashree, and Himself, in the main sinhasan of the Mandir.

The Mandir has undergone extensive renovations. The iconic elements of traditional Hindu temples are the colossus towers (Sikhars) that adorn the roof of the building and signify the position of Lord Swaminarayanbapa Swamibapa within the Mandir. These towers are topped with ornate golden caps (kalashs) and ceremonial flags. By the grace of Acharya Swamishree Maharaj, these awe-inspiring elements now embellish the beauty and divinity of Shree Swaminaraayan Mandir, Delhi.

A 3 day festival was held to celebrate the installation of the new Shikhars and Kalashs. Acharya Swamishree Maharaj and a large group of Sants and disciples reached Delhi late on Tuesday 26 September 2017. At the start of the festival, He consecrated each golden kalash, before they were attached to the Sikhars by Sants, and the flags for the Mandir were hoisted aloft.

The female disciples, led by the worshipful ascetics (Sankhya-yogis) held devotional prayers and chanting in the main Mandir assembly hall to start the formal proceedings of the festival. During the evening, communal devotional dancing was held in a large garden on the banks of River Jamuna. During the evening of Friday 29 September, the Sants and disciples living in the Delhi region took the opportunity to celebrate Acharya Swamishree Maharaj’s Sadbhav Amrut Mahotsav, the year-long festivities to mark His 75 years.

On Saturday 30 September 2017, exactly 39 years after Swamibapa inaugurated the Mandir, Acharya Swamishree Maharaj performed the patotsav ceremony of Lord Shree Swaminarayanbapa Swamibapa. A grand feast was offered to the Lord, after which disciples performed aarti. In His divine blessings, Acharya Swamishree Maharaj explained the importance of keeping control over one’s mind, thoughts, words and actions, and ensuring that they align with the directives of the Lord. It is very easy to tread onto the slippery slope of vices and disrespect for one another; when this occurs in a person He explained, it should be understood that the person has commenced his journey to degeneration and is moving away from the grace of God. 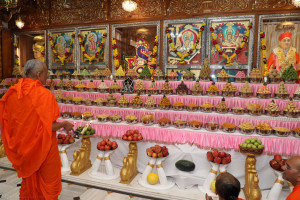 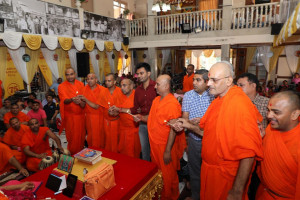 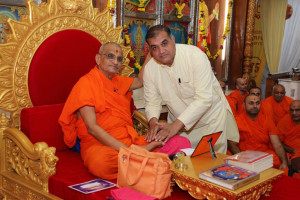 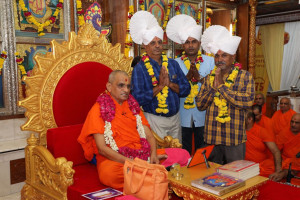 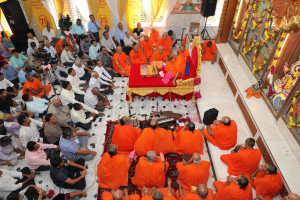 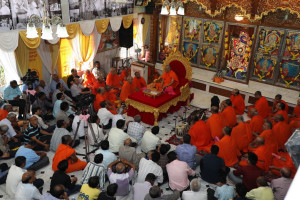