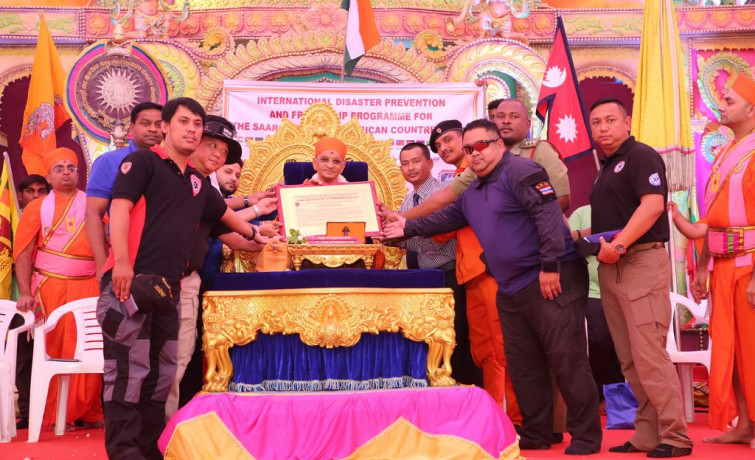 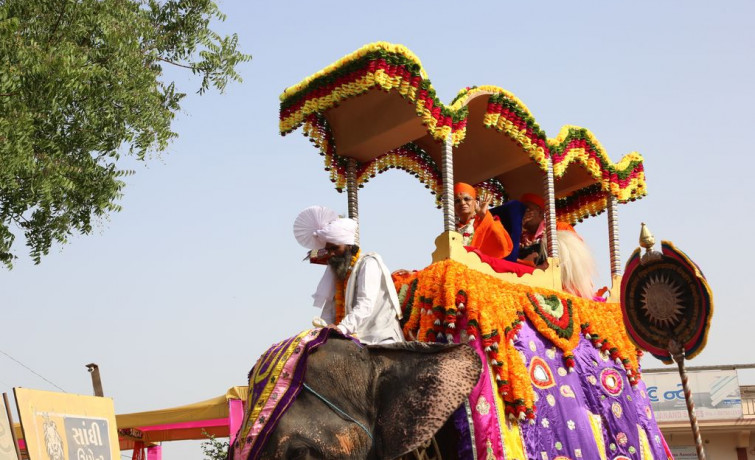 The fourth day of the celebrations commenced with Acharya Swamishree Maharaj performing the mangla aarti in the Mandir. He then visited the home of the main benefactor of the festival for a padhramani.

“Only those who are one with Lord Swaminarayan understand the reality of the Lord. Sadguru Shree Nirgundasji Swamibapa preached the superiority of Lord Swaminarayan and also introduced the disciples of the Karan Satsang to Jeevanpran Shree Abji Bapashree.

“The name and glory of Jeevanpran Shree Abji Bapashree, who was so beloved by Shree Nirgundasji Swamibapa, remains alive today due to the efforts and work of Gurudev Shree Muktajeevan Swamibapa. It is Shree Muktajeevan Swamibapa who has spread the true supremacy of Lord Shree Swmainarayan, and Bapashree, and their supreme, eternal philosophy around the world. If it was not for Swamibapa, this would all have become extinct.

“We are truly fortunate that we have been granted Swamibapa as our Gurudev, and the shelter of Shree Swaminarayan Gadi. It is our duty to remain devoted to Him at this Gadi, and committed to adhere to His commands and teachings. Then, He will continue to save us from our troubles and miseries, within this world and thereafter, and grant us eternal bliss within the Murti of God.”

Chief guests during this assembly were Shri Vasanbhai Aahir, Hiteshbhai Khandol, Dhanjibhai Bhuva, Rahulbhai Gor, all leading representatives of the region’s Bharat Janta Party. Under the direction of Acharya Swamishree Maharaj, Maninagar Shree Swaminarayan Gadi Sansthan has remained committed to providing charitable donations and help in the field of education. Gujarat Legislative Member Shri Vasanbhai Aahir has witnessed many of the expeditions when our Sants have gone to the most remote regions to provide whatever provisions were needed in schools, so that they can give good education to the young children. He praised Acharya Swamishree Maharaj for bestowing such kindness to those who need it the most.

Acharya Swamishree Maharaj then welcomed and blessed a range of guests who are all engaged in disaster relief efforts. Maninagar Shree Swaminarayan Gadi Sansthan has for many years supported relief efforts during times of natural disasters. More recently the Sansthan has joined forces with partner organisations from other countries in the region to form a strong coalition with greater relief-delivering impact – operating under the auspices of the South Asian Association for Regional Cooperation (SAARC), which is an economic and geopolitical organisation of eight countries (Bangladesh, Bhutan, India, Maldives, Nepal, Pakistan, Sri Lanka, and more recently joined, Afghanistan). Today, representatives from those international organisations gathered to be honoured by Acharya Swamishree Maharaj. Jointly, they presented a Letter of Appreciation to Acharya Swamishree Maharaj. Shri Hitesh Patel, Co-ordinator of the program and senior volunteer of Shree Muktajeevan Disaster Management and Rescue Training Academy, led this part of the assembly.

At 4pm, hundreds of disciples and onlookers gathered at the Mandir. A number of music bands, including members of Shree Muktajeevan Swamibapa Pipe Band Maninagar and Kenya, assembled around the four elephants that would lead the procession, as everyone eagerly awaited the arrival of Acharya Swamishree Maharaj.

Just before 7pm, the procession returned to the Mandir, and Acharya Swamishree Maharaj performed the Sandhya aarti ceremonies. To conclude the festivities of this magnificent day, a spectacular fireworks display was held in the open ground just outside the village. 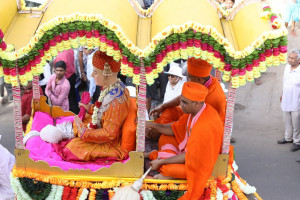 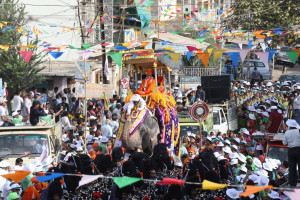 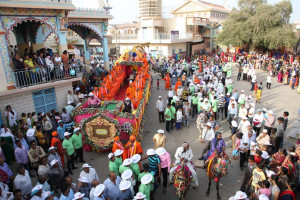 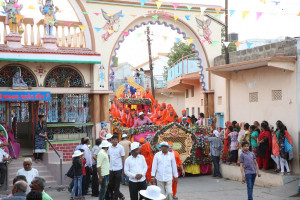 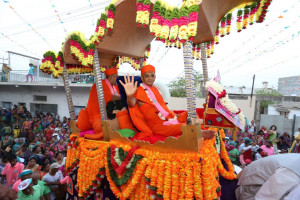 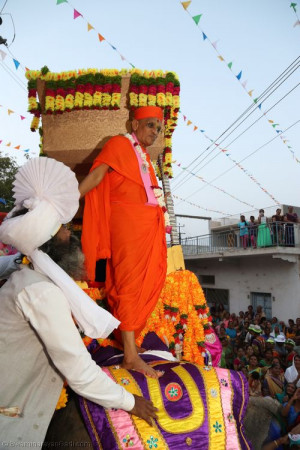